The usual way to set up remote access to our macOS CCTV software SecuritySpy running on your Mac is via port forwarding (see Installation Manual – Remote Access). This method allows direct incoming connections to SecuritySpy from the Internet, and is enabled by some configuration in your router (which, for most routers, SecuritySpy can do automatically). This method is great for most users, as it usually allows high-performance remote access with minimal configuration.

However, some users may want to consider other methods for the following reasons:

If you can’t use port forwarding for any reason, the solution is to set up a VPN or Tunnel (sometimes called a proxy) via a third-party service in order to access your system. A number of these solutions are described below, with setup instructions.

The two VPN solutions described below are “peer to peer” systems: a central server sets up the connection between clients, who then communicate directly (in the minority of cases where this is not possible, the system falls back to relaying data via the server). On the other hand, with tunnel/proxy solutions, the data is always relayed via a central server.

All installation and setup must be done on the Mac running SecuritySpy. You will also need to enable SecuritySpy’s HTTP web server (even though the connection to SecuritySpy is via plain HTTP, this connection is happening within the Mac itself – when data leaves the Mac to travel over the Internet, it is encrypted by the VPN/Tunnel software). 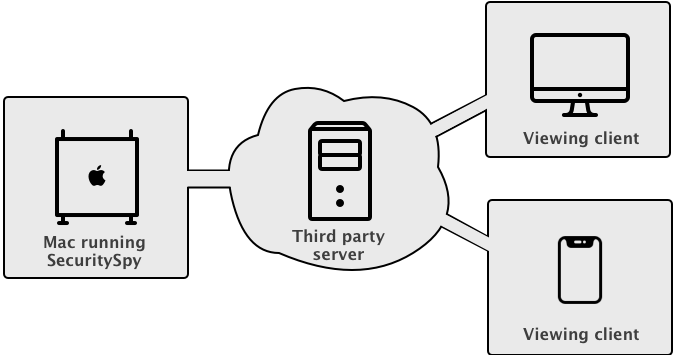 VPN client software is installed on the SecuritySpy Mac and on all devices you want to use for remote access. All devices on the VPN can communicate freely with each other, via their VPN IP addresses, just as though they were on the same physical local network. Devices are not accessible outside the VPN.

END_OF_DOCUMENT_TOKEN_TO_BE_REPLACED

SecuritySpy, our macOS CCTV software, has built-in HomeKit integration that allows it to control, and be controlled from, accessories like sensors, switches and lights, across your Apple Home automation system.

But, what about making live video from SecuritySpy’s cameras available to Home? This blog post explains how to do this. END_OF_DOCUMENT_TOKEN_TO_BE_REPLACED

With the right app, an iPhone or iPad can make an effective security camera that provides standard RTSP video/audio feeds. This is especially useful for older iOS devices that would otherwise be unused, making for an easy and inexpensive way to add an extra camera to your video surveillance system built around our macOS NVR software SecuritySpy.

In order for an iOS device to be used for video surveillance, it should be powered all the time and set to never sleep. Such a device should never be used for a critical CCTV purpose, since things like power outages or app/devices crashes may require manual intervention to put right. This can be mitigated somewhat with Apple’s Guided Access or Single App features.

The following apps have been tested and confirmed to work well with SecuritySpy for H.264 RTSP streaming, delivering high-quality and efficient video/audio streams to SecuritySpy. END_OF_DOCUMENT_TOKEN_TO_BE_REPLACED

SecuritySpy, our fully-featured video surveillance solution for the Mac, offers a built-in web server that you can use to access your CCTV system from the Internet. For ease of setup, SecuritySpy allows you to choose your own free domain name in the form name.viewcam.me, which is used to access your system. SecuritySpy will automatically keep this domain updated with your current public IP address whenever it changes (this is called DDNS), and it will automatically generate and renew a free SSL certificate for secure HTTPS access.

However, some users may want to use their own domain name instead of the viewcam.me name provided. One way to do this would be to purchase a static IP address from your ISP, to which you point your domain, and then purchase and install your own SSL certificate for SecuritySpy. The downside to doing this is the cost, setup, and the fact that you will have to manually renew your certificate whenever it expires.

There is a better solution that allows you to use your own domain but that does not require a static IP address, incurs no ongoing costs, and offers automatic renewal – here’s how to set this up: END_OF_DOCUMENT_TOKEN_TO_BE_REPLACED

Here are our network camera picks for 2022. They are listed in no particular order (they are quite varied in terms of cost and feature set, which makes them difficult to rank as a “top 10″ list), however they are all cameras that, due to their impressive features, we recommend to our customers for use with our SecuritySpy CCTV software for the Mac.

Some abbreviations used below are as follows:

All “outdoor” cameras can be used indoors, however they tend to have larger form factors due to their waterproof housings. This isn’t always the case though – many of the cameras listed below are compact and absolutely suitable for both indoor and outdoor usage – we have marked these “indoor/outdoor”.

B&H Photo Video is a good source for buying cameras in the USA. Amazon is another option, however it lists many “grey market” products (e.g. those designed for the Chinese market but sold in the USA against the manufacturer’s rules), which should be avoided due to lack of manufacturer support.

We are not affiliated with any outlet or manufacturer mentioned on this page, and we get no financial incentive for recommending them. 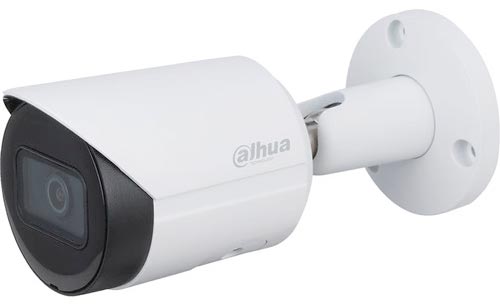 This is a basic, inexpensive outdoor camera with 4 MP resolution, good low-light performance, IR night-vision, and a compact form factor. It has a fixed 2.8mm lens, which produces a wide-angled view covering 102° horizontally. At only $100, this camera is great value and can make an effective addition to any CCTV system.

END_OF_DOCUMENT_TOKEN_TO_BE_REPLACED

Our macOS CCTV software SecuritySpy saves all recordings to a local drive. By default, the Mac’s internal drive is used, but you can specify any other drive(s) you want to use for this purpose, for example an external drive connected by USB or Thunderbolt or a NAS (Network Attached Storage) drive on the local network.

Modern drives are very reliable, and for most users the small chance of data loss due to drive failure may not be too concerning. However, this could be more of a concern for more critical commercial applications, plus there is also the possibility than an intruder could damage or steal the drive.

To minimise the chance of data loss, there are a few basic steps that users can take, for example by using only high-quality drives from reputable manufacturers, securing drives with anti-theft devices, or using multi-disk RAID disk setups that provide fault-tolerance.

One further method to prevent data loss is to set up automatic offsite backup for the most important captured footage, so that this can be retrieved if the primary storage drive is compromised. There are a few ways to do this: END_OF_DOCUMENT_TOKEN_TO_BE_REPLACED

The IP camera market is replete with bullet-style cameras, with Dahua Technology being one of the major manufacturers of cameras of this type. Basic Dahua bullet cameras are well-designed, inexpensive, and generally provide good quality video, however it doesn’t cost too much more to get a model like this one, which has some key features that allow it to perform much better than basic models. 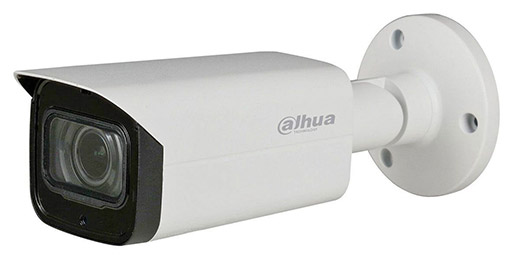 END_OF_DOCUMENT_TOKEN_TO_BE_REPLACED

Dahua Technology have such an extensive range of IP cameras that it can be difficult to choose between them, especially between models that are superficially similar. Generally, Dahua cameras work very well with our macOS CCTV software SecuritySpy, and this particular model, the IPC-HDW5831R-ZE, looks like it could be something special.

This is an “eyeball” type camera, which is a form factor with some significant advantages: they are generally compact in size, easy to swivel and rotate to the correct position, and, unlike dome cameras, there is no curved perspex dome in front of the lens to reduce quality.

END_OF_DOCUMENT_TOKEN_TO_BE_REPLACED

Video doorbells are becoming increasingly popular, and have the potential to make a useful addition to any CCTV system. Our macOS CCTV software SecuritySpy works with many different video doorbells, but choosing one to use can be difficult, as they vary significantly in terms of feature set, quality, reliability and cost. In addition, many video doorbells (e.g. Ring, Nest, Eufy) are designed as closed cloud-based systems that lock you into a subscription, and specifically don’t work with NVR (Network Video Recorder) software such as SecuritySpy.

The Axis A8105-E doorbell offers a good all-round feature set, including 2 MP resolution, Power-over-Ethernet, two-way audio, compact design, and multiple input/output ports to connect accessories such as chimes and door openers. A 1.56mm lens provides an outstandingly wide 180º horizontal field of view and the ability to capture people very close to the camera. 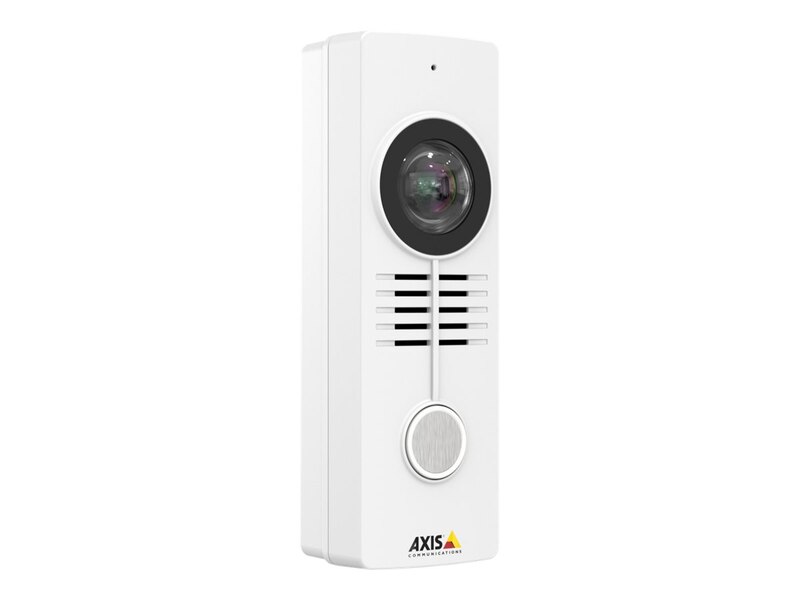 END_OF_DOCUMENT_TOKEN_TO_BE_REPLACED

Here are our network camera picks for 2021. They are listed in no particular order (they are quite varied in terms of cost and feature set, which makes them difficult to rank as a “top 10″ list), however they are all cameras that, due to their impressive features, we recommend to our customers for use with our SecuritySpy CCTV software for the Mac.

Some abbreviations used below are as follows:

For purchasing IP cameras, we recommend B&H Photo Video – they are a reliable, established outlet. Amazon is another option, however there are many “grey market” cameras sold on Amazon (e.g. cameras designed for the Chinese market only, but sold into the US against the manufacturer’s rules), which should be avoided due to lack of support from the manufacturer.

We are not affiliated with any outlet or manufacturer mentioned on this page, and we get no financial incentive for recommending them. 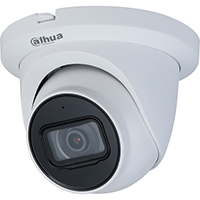